Giselle Loor is not a mind reader but she does admit to sometimes knowing what her clients want before they do—and relying heavily on intuition to inspire her projects. Her husband, Brett Sugerman, doesn’t dispute this. (Brett is the “b” and Giselle the “g” in the Fort Lauderdale design firm they founded in 2006.)

“I approach things differently than Brett,” she says of her husband, who is known for his form-follows-function-follows-form mantra and his attraction for the technical aspects of architecture. “He is more left-brained, more male in perspective than I am,” Loor adds. Together, their ability to embrace both perspectives is b+g design’s métier, the sexy secret to their success. 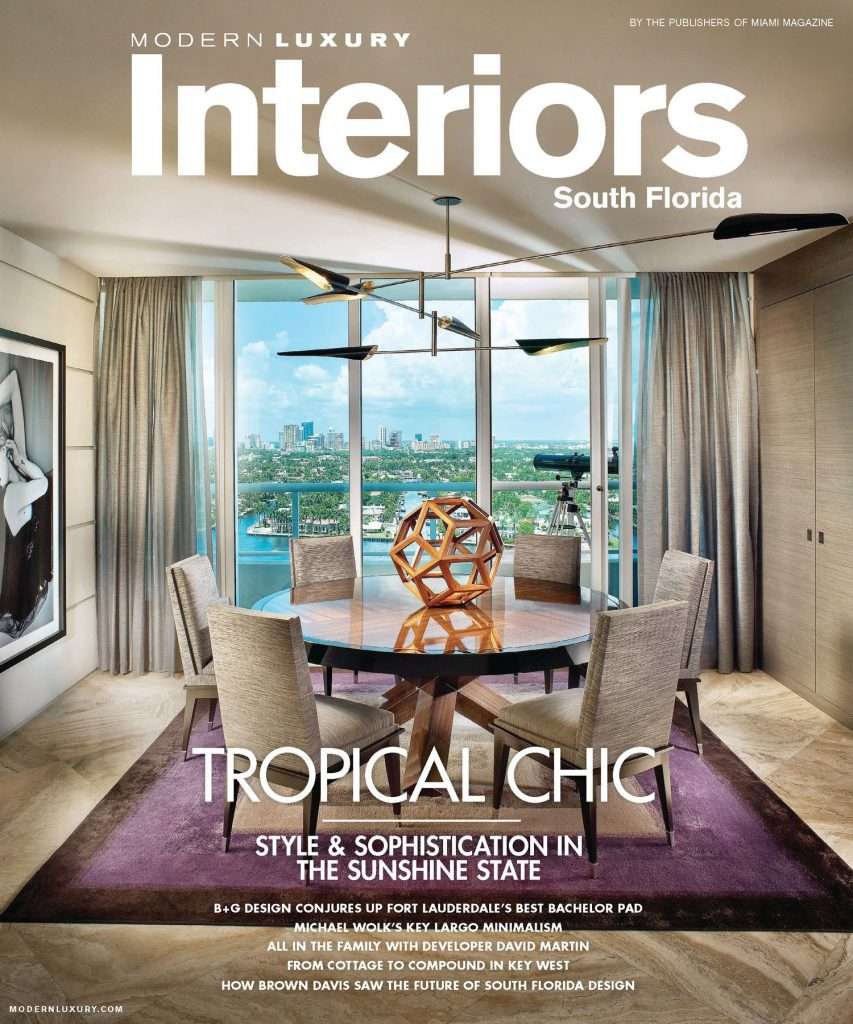 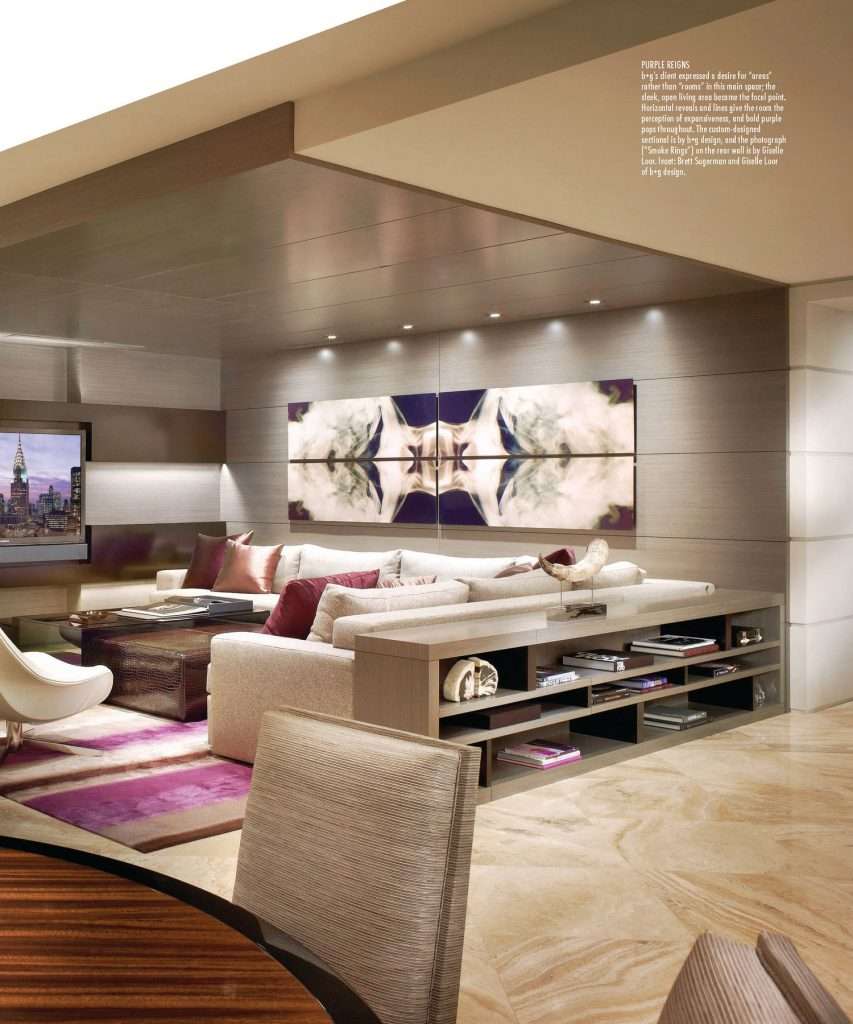 Consider their recent revamp of a 19th-floor condominium at The Residences at The Ritz-Carlton in Fort Lauderdale. They were hired by a former client who had been so pleased with their past work that this time he gave them carte blanche. So b+g was decisive: They gutted the previously occupied 3,000-square-foot space, leaving only some travertine floors and the better part of the kitchen intact. From there, they devised an individualized plan, reflecting the man and his lifestyle. Recently single, he would be moving from a 10,000-square-foot home in a gated community to this smaller spot by the sea.

What the home would not be was some chrome cliché of masculinity or the South Florida fallback of sparseness and white-on-white. “We specialize in not all white,” Sugerman says. “People think of contemporary as minimalist and austere, but we like to make it rich.” 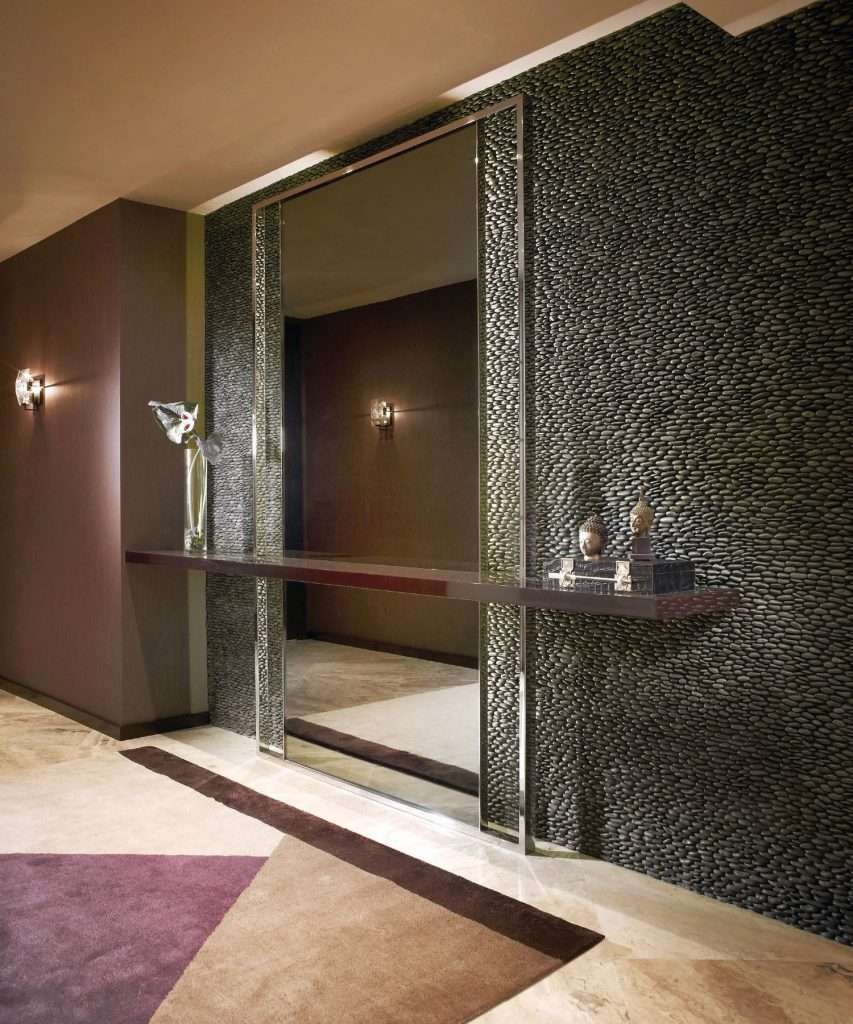 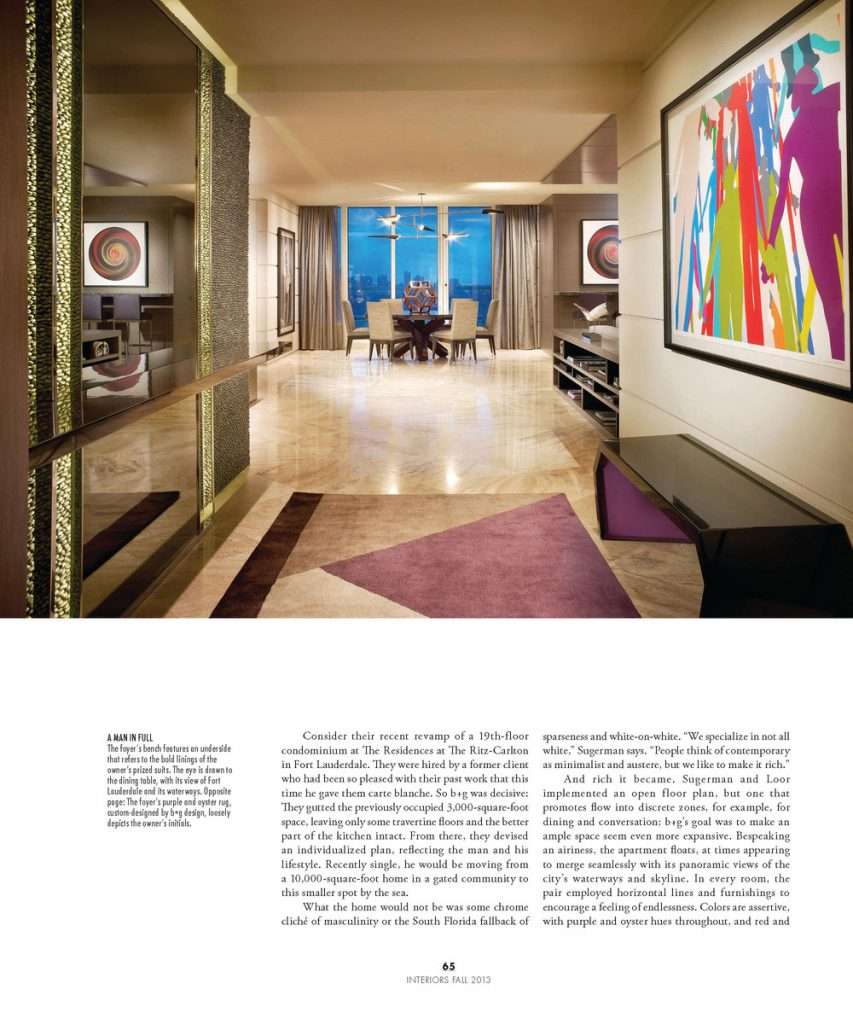 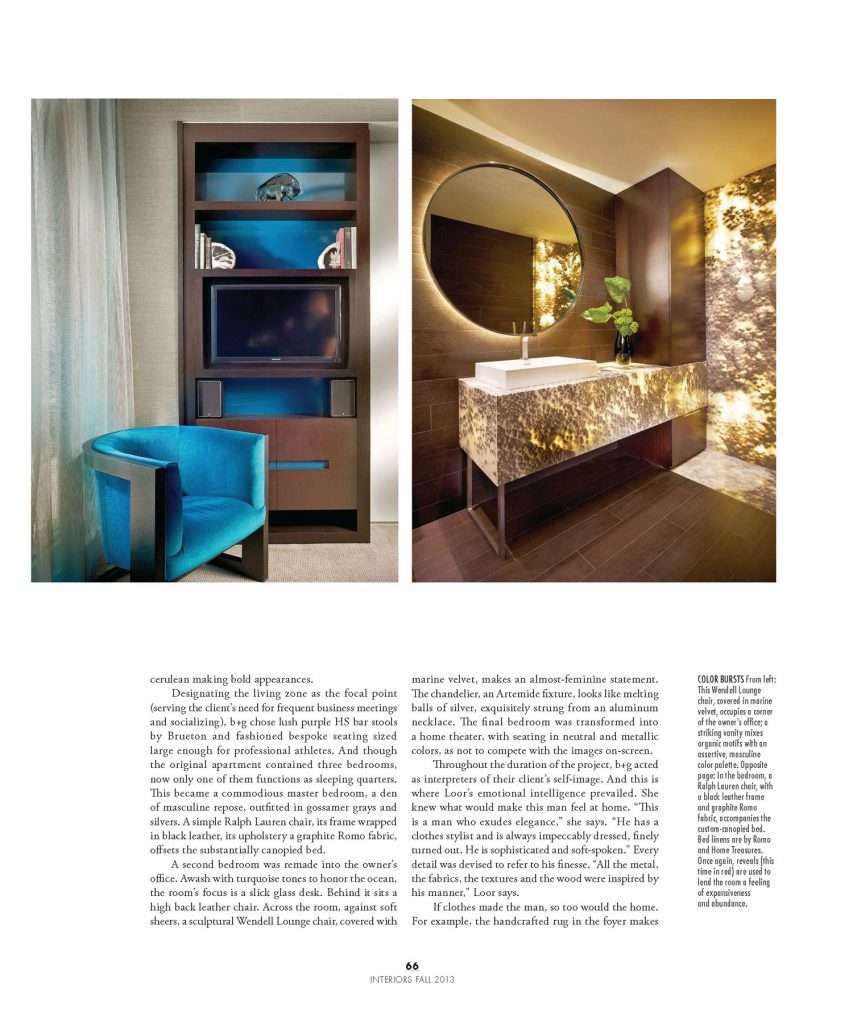 And rich it became. Sugerman and Loor implemented an open floor plan, but one that promotes flow into discrete zones, for example, for dining and conversation; b+g’s goal was to make an ample space seem even more expansive. Bespeaking an airiness, the apartment floats, at times appearing to merge seamlessly with its panoramic views of the city’s waterways and skyline. In every room, the pair employed horizontal lines and furnishings to encourage a feeling of endlessness. Colors are assertive, with purple and oyster hues throughout, and red and cerulean making bold appearances.

Designating the living zone as the focal point (serving the client’s need for frequent business meetings and socializing), b+g chose lush purple HS bar stools by Brueton and fashioned bespoke seating sized large enough for professional athletes. And though the original apartment contained three bedrooms, now only one of them functions as sleeping quarters. This became a commodious master bedroom, a den of masculine repose, outfitted in gossamer grays and silvers. A simple Ralph Lauren chair, its frame wrapped in black leather, its upholstery a graphite Romo fabric, offsets the substantially canopied bed. 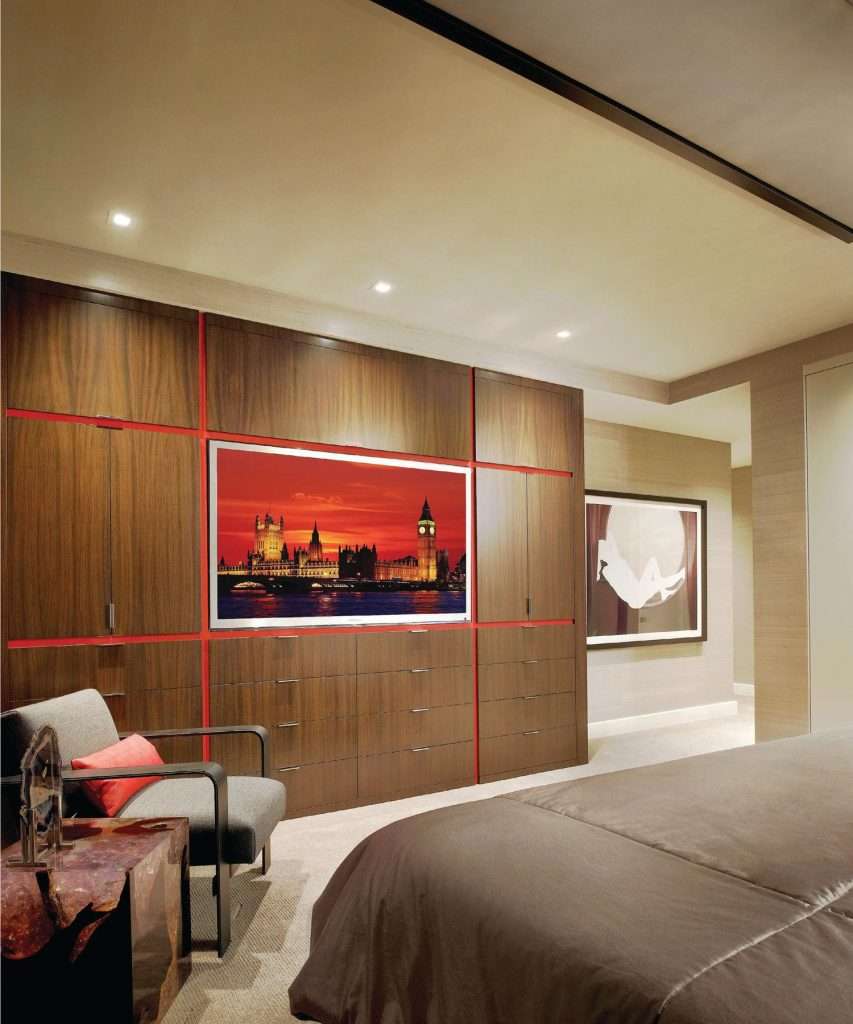 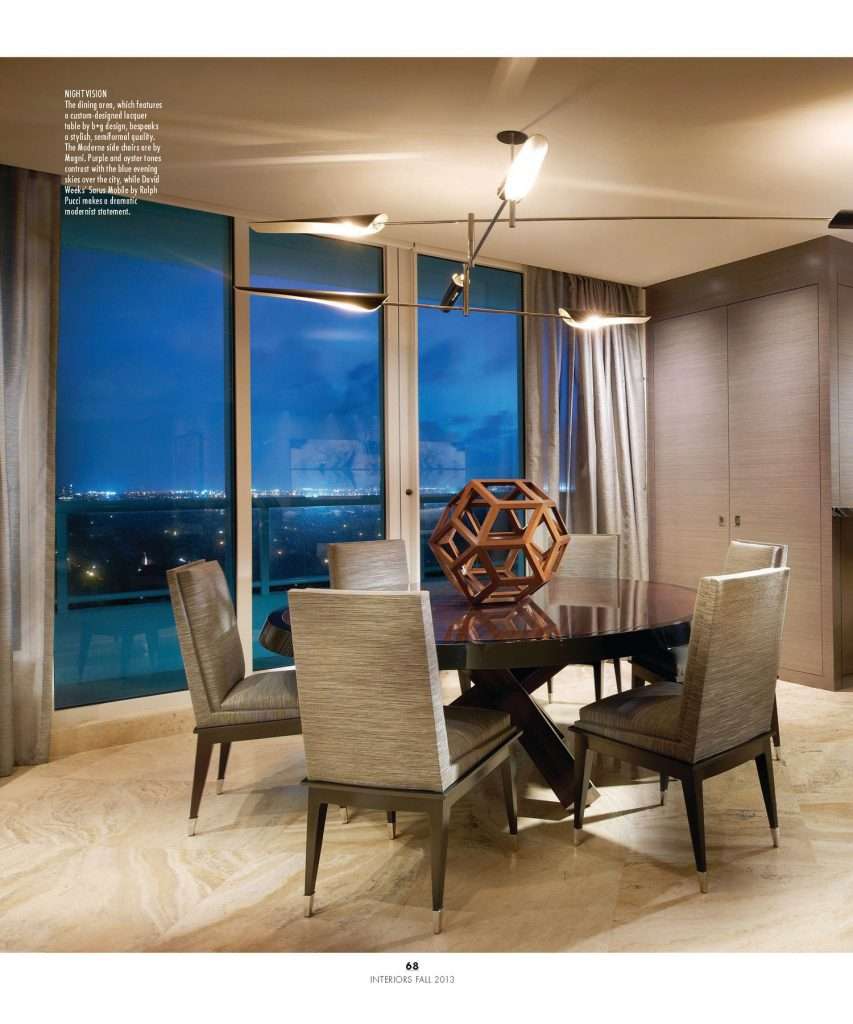 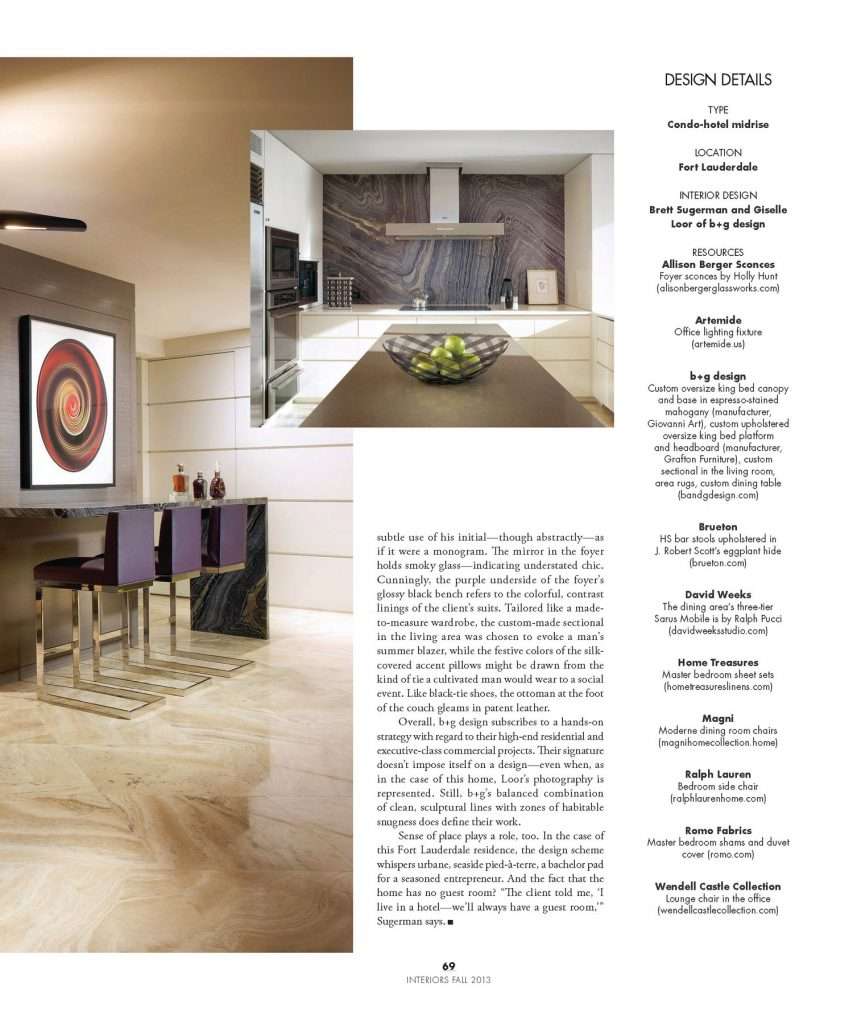 A second bedroom was remade into the owner’s office. Awash with turquoise tones to honor the ocean, the room’s focus is a slick glass desk. Behind it sits a high back leather chair. Across the room, against soft sheers, a sculptural Wendell Lounge chair, covered with marine velvet, makes an almost-feminine statement. The chandelier, an Artemide fixture, looks like melting balls of silver, exquisitely strung from an aluminum necklace. The final bedroom was transformed into a home theater, with seating in neutral and metallic colors, as not to compete with the images on-screen.

Throughout the duration of the project, b+g acted as interpreters of their client’s self-image. And this is where Loor’s emotional intelligence prevailed. She knew what would make this man feel at home. “This is a man who exudes elegance,” she says. “He has a clothes stylist and is always impeccably dressed, finely turned out. He is sophisticated and soft-spoken.” Every detail was devised to refer to his finesse. “All the metal, the fabrics, the textures and the wood were inspired by his manner,” Loor says.

If clothes made the man, so too would the home. For example, the handcrafted rug in the foyer makes subtle use of his initial—though abstractly—as if it were a monogram. The mirror in the foyer holds smoky glass—indicating understated chic. Cunningly, the purple underside of the foyer’s glossy black bench refers to the colorful, contrast linings of the client’s suits. Tailored like a made-to-measure wardrobe, the custom-made sectional in the living area was chosen to evoke a man’s summer blazer, while the festive colors of the silk-covered accent pillows might be drawn from the kind of tie a cultivated man would wear to a social event. Like black-tie shoes, the ottoman at the foot of the couch gleams in patent leather.

Overall, b+g design subscribes to a hands-on strategy with regard to their high-end residential and executive-class commercial projects. Their signature doesn’t impose itself on a design—even when, as in the case of this home, Loor’s photography is represented. Still, b+g’s balanced combination of clean, sculptural lines with zones of habitable snugness does define their work.

Sense of place plays a role, too. In the case of this Fort Lauderdale residence, the design scheme whispers urbane, seaside pied-à-terre, a bachelor pad for a seasoned entrepreneur. And the fact that the home has no guest room? “The client told me, ‘I live in a hotel—we’ll always have a guest room,’” Sugerman says.